2.5K shares
This post may contain affiliate or referral links. Read more about this in our disclosure policy.

Meeting characters at Disney World in Orlando, Florida has become quite the thing to do over the past few years. It used to be that you would have a camera ready and just be surprised and roll with it when one popped up in the park near you, but those days are long gone. Now, each park has designated places every day for specific characters and times when you can meet them. But there are still some that are hard to find here are some tips for meeting Disney characters that are a bit more difficult to find! 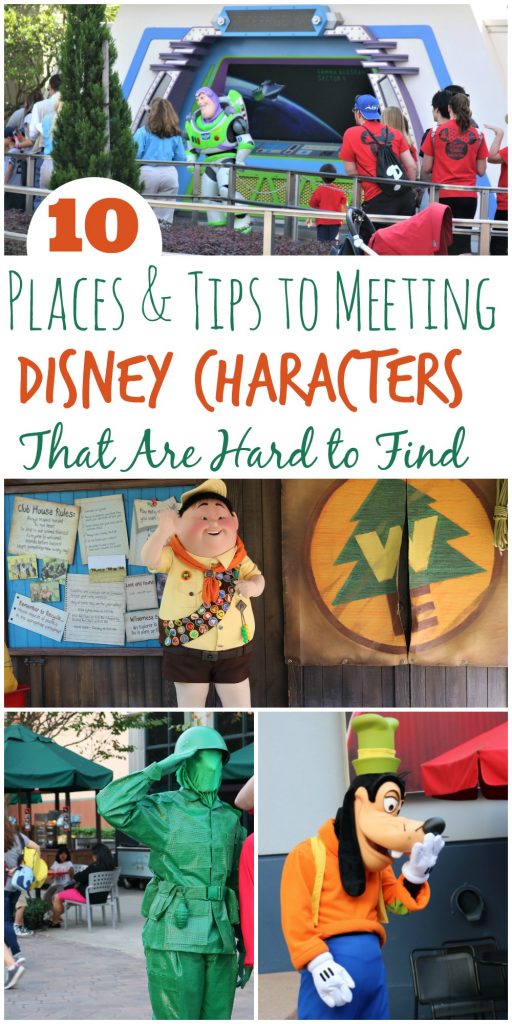 Getting their autographs is a fun and trendy way to go in the process too, so if your kids are excited to meet them, have them bring an autograph book or another special item to get signed. Bring a good sized pen as well, since their hands tend to be large and awkward, this makes it much easier on them.

Here is a list to help you in your journey of finding and meeting Disney characters and some tips on where you can see more rare and secret ones, too. This will make your vacation to Orland Florida even more special!

One more tip. If you want to check out the non Universal or Disney park attractions you can get discount admission with the Orlando GoPass. You can save up to 55% off admission prices buy building your own pass. Locations to choose from including Legoland, Sea World, Bush Gardens, The Titanic Museum, The Kennedy Space Center, Gatorland, many water parks and more! You can also buy an all-inclusive pass for up to 5 days and get into as many attractions as you can fit into your schedule for 5 days!

If you are looking for the best deals on a place to stay make sure you look for places to stay on Airbnb. You can also get a free $40 Airbnb credit when you sign up for a free account via my link.

Also, make sure to check out our travel deals page for any deals or sales on your next trip no matter where it is!

When visiting any of the parks, always grab the times guide and map as you come in. It will tell you who will be where and at what times of the day. Those characters are the ones that are the anchors, and they can change sometimes, but mostly they will remain the same all the time and so if you miss them one day and you’ll be going back, you don’t have to worry that you lost your chance.

If your child (or yourself) has one character you are dying to meet, ask at guest services as soon as you get there. They can most likely tell you where they’ll be, if they are there that day and save you the time and stress of hunting and hoping all day, or missing out from being across the park at the wrong time.

Expect long lines for the princess meet and greets. Plan accordingly to allow time for the wait, as it can get up to over an hour for some of them during the busier times. Go right away if your child has one they are set on a meeting, so you don’t end up missing it. Mickey is one that everyone wants to get, and he is in each park, in different outfits. At the Magic Kingdom, he is in the Town Square Theater, which is to the right on Main Street as you enter the park. Tinkerbell is also in the theater where Mickey is located. Anna and Elsa, Cinderella, Merida, and Ariel can also all be found in the park with wait times for meeting them. 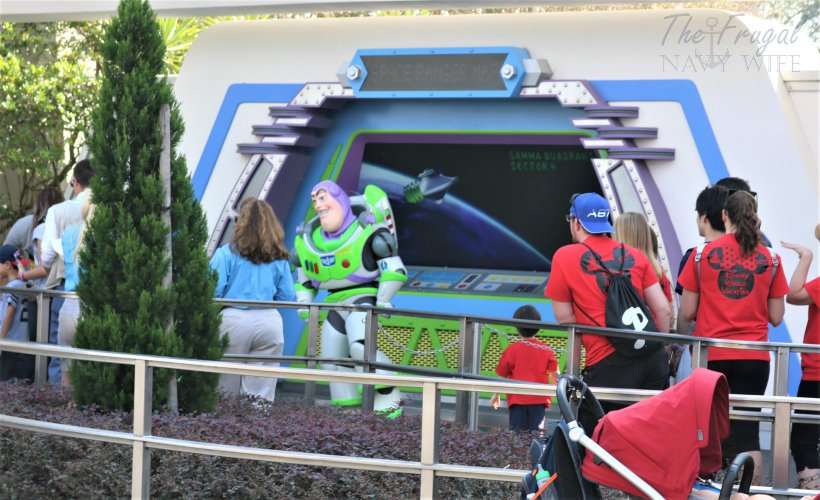 Buzz Lightyear is often over by the Buzz ride in Tomorrowland, and sometimes Stitch can be found in that area as well. One place to find more rare characters is in the Circus tent area near Goofy’s Barnstormer coaster. You can find ones in different outfits, like Goofy that you won’t see out in the parks. And near the teacup ride, you can sometimes find Alice, the Queen of Hearts, the Mad Hatter and Tweedledum and Tweedledee. 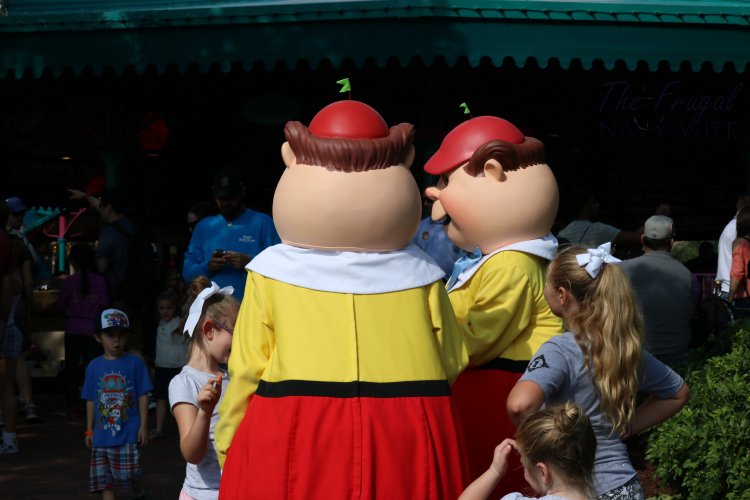 This park has a good variety of meet and greets for Star Wars characters, like Kylo Ren and Chewbacca, where you wait in the line inside the Star Wars launch bay, but out in front of there and near the animation studios area, you can see some walking around from time to time as well. You can meet the Jawa, who are so cute and friendly, running around in the launch bay sometimes.

Related: 11 of the Absolute Best Places to View Manatees in Florida

Many of the Star Wars ones also go out into the main area that’s called the Streets of America. The troopers are a riot and will totally mess with people, giving everyone quite a show. Also, they do what they call “Characterpalooza” at this park, where many random characters will roam the streets and pose for photos with you.

In the Pixar area, you are likely to find Woody and Buzz, as well as the army men, who are hilarious. You can see Chip and Dale wondering about sometimes in their PJ’s or in Christmas hats in December, as well as Captain Hook, Pinocchio, and Jafar. There is an Olaf meet and greet set up there as you’re headed back towards the Star Wars ride too. Also, a newer one is Doctor Strange on Bleeker Street near the Pixar area. 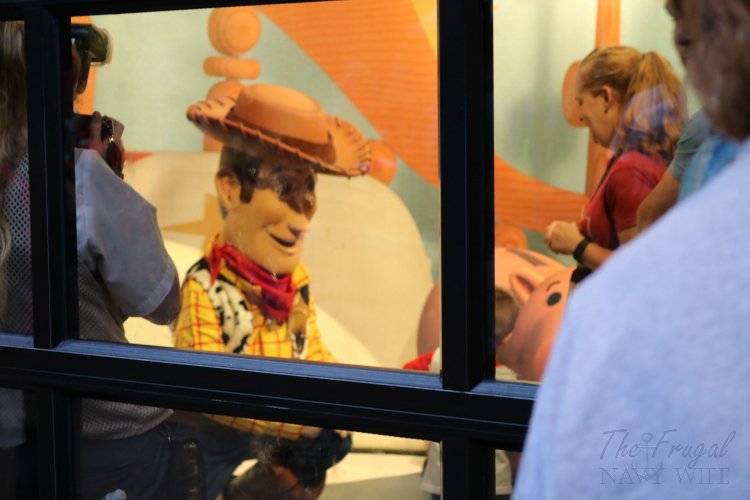 There is a Disney Junior Meet and greet time for the little ones as well in the animation courtyard. And lastly, of course, Mickey and Minnie have their times you can meet them too, and he is in his Sorcerer’s hat. Donald Duck can also be found near the entrance to the park as well. 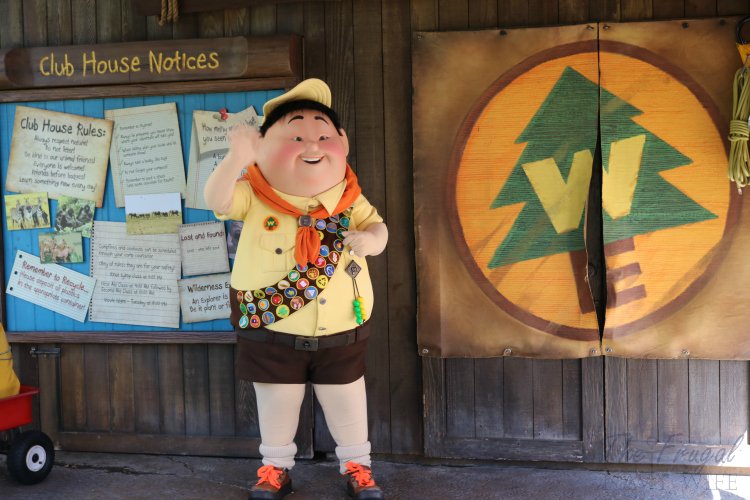 This park has regular meet and greets you can find daily with Russel and sometimes Dug from UP, Pocahontas, Tarzan, Flik and Mickey and Minnie in their safari outfits, who can be found in Discovery Island at their headquarters. Donald and Daisy can be found at Tusker House, which is a breakfast buffet. Then you are likely to see a few others roaming around who are rarer like Baloo and King Louie from the Jungle Book, Meeko, and Pluto and Goofy. Most times none of these are going to have too long of a line or a backup with them unless it is a super busy time at the parks. 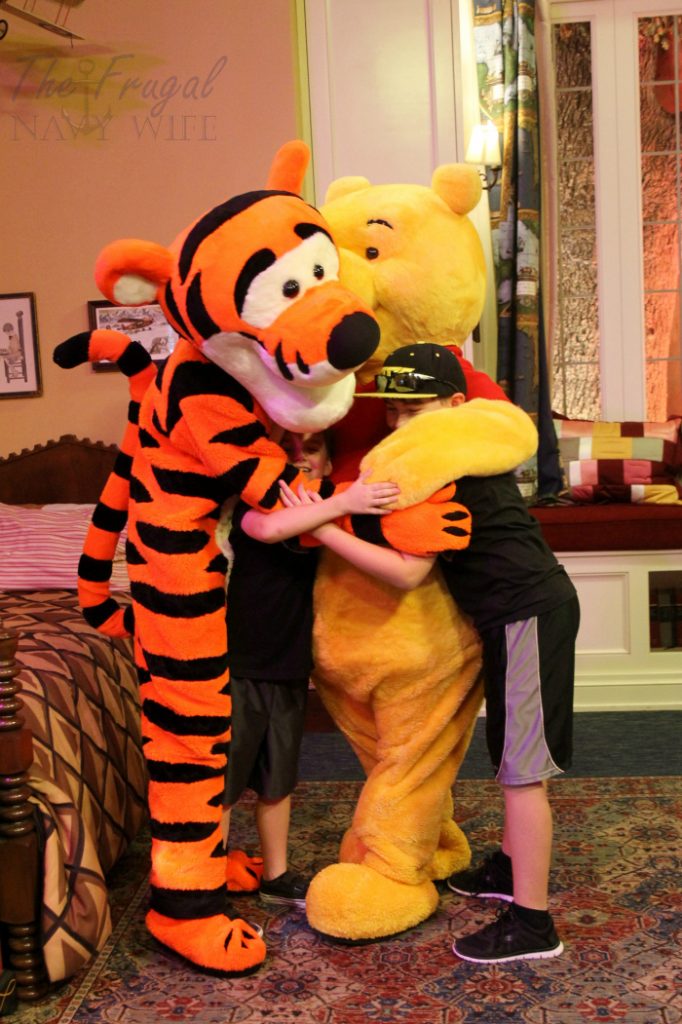 This park is a great one for finding characters, and it doesn’t tend to get as crowded as the Magic Kingdom, although there are a few that will tend to have long lines. You can meet Aurora back near Paris, Pooh and friends, Alice, Mary Poppins (and sometimes Bert) are in the London area. The “fab five” – Mickey, Pluto, Goofy, Minnie, and Donald are most times in the Epcot Character Spot, which is near the Innoventions West area. Also, in most of the countries out on the World Showcase, you will find characters, like Snow White in Germany, Belle in France and Mulan in China. Jasmine and Aladdin can sometimes be seen out and about too. Monsters, Inc characters have been seen at Epcot as well as Chip and Dale, Joy and Sadness, Farmer Mickey Mouse, and Caballero Donald.

Have a Disney Visa card? If so, you can get in on a secret meet and greets that other people can’t get at Epcot each day in the Innoventions area.

Book a Meal to Dine With and Meet Disney Characters

This is one way to be sure you get to meet some. The Crystal Palace at the Magic Kingdom is a great place for that, as well as Be our Guest to meet Belle and the Beast, Tusker House at the Animal Kingdom, or Chef Mickey’s at the Contemporary Resort. The characters walk around as you eat, and they spend time at your table, making it very fun and worth your while. 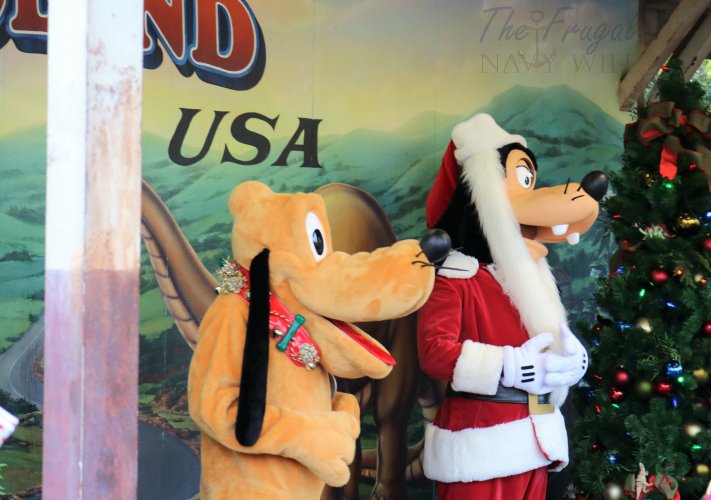 Even More Rare Meet and Greets

Book a Holiday Party – Either Mickey’s Very Merry Christmas Party or Not-So-Scary Halloween party. There you will find many characters who don’t come out any other time of the year. They do have some stations set up for picture taking with more popular ones, but many will be out and about.

Run a Disney Race – There are characters at these races that you won’t see in the parks, or they will be in different costumes. Ariel, Sally and Jack, Robin Hood cast, and more. Depending on the time of the year or the theme of the race they can be wearing different seasonal attire too.

Looking for even more Disney tips? Check out these great posts

Just so you know, you can only meet the beast at BOG and only for dinner, Belle is not there.

This must have changed then. Thank you for the update.

Great post! I also like to tell folks that the only spot to see Belle in her yellow ball gown is at Enchanted Tales with Belle in MK. She is at Epcot, but in the blue village dress. BUT if you have a young children at Enchanted Tales, sometimes they allow for a photo opp at the end of the show.