17 shares
This post may contain affiliate or referral links. Read more about this in our disclosure policy.

If you’ve visited Disney’s Animal Kingdom at Walt Disney World Resort before, then you know that it is a wonderful park that is as awesome as any Disney adventure can be, but unlike their other theme parks. There are different countries to visit throughout the park and each one is so well done in its décor and attention to detail, that when you enter and walk through it, you feel transported to Disney World Pandora.

The brand-new Disney World Pandora area, is no exception. The floating island tops can be seen as you drive in to the park and you can get an idea of where it is, but you truly have no idea how amazing they really are until you get into the area and stand in front of them.

It is a subtle change at first, exiting the country before it and entering Pandora, and then, you will cross a bridge, that is all decorated with lanterns and metal work, that is unlike the last area, and suddenly the plant life changes and you’ll come up to a huge sculpture and plant on one side, and the Pandora sign. I will say that this area has no huge gate the way most of the others do, but it is not needed. 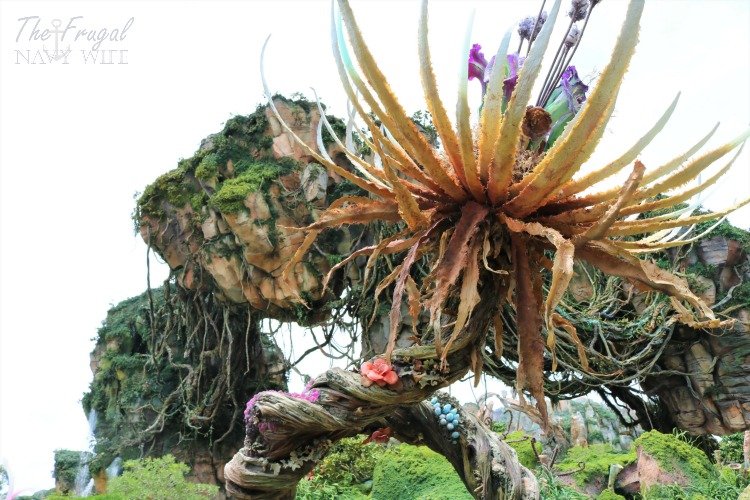 Disney never lets us down in that they make everything look and feel authentic. The array of tropical plants at Disney’s Animal Kingdom, including orchids and tons of bromeliads, are combined in with the local plant life. Then, there are the more “Pandora” plants that are added and a lot of really fantastic, antiqued and rusty metal work, which gives it its own vibe entirely.

The floating islands are quite huge and even pictures can’t do them justice. You can walk underneath them, and see a ton of roots, flowers, plants and so much detailing that you almost forget they aren’t real. 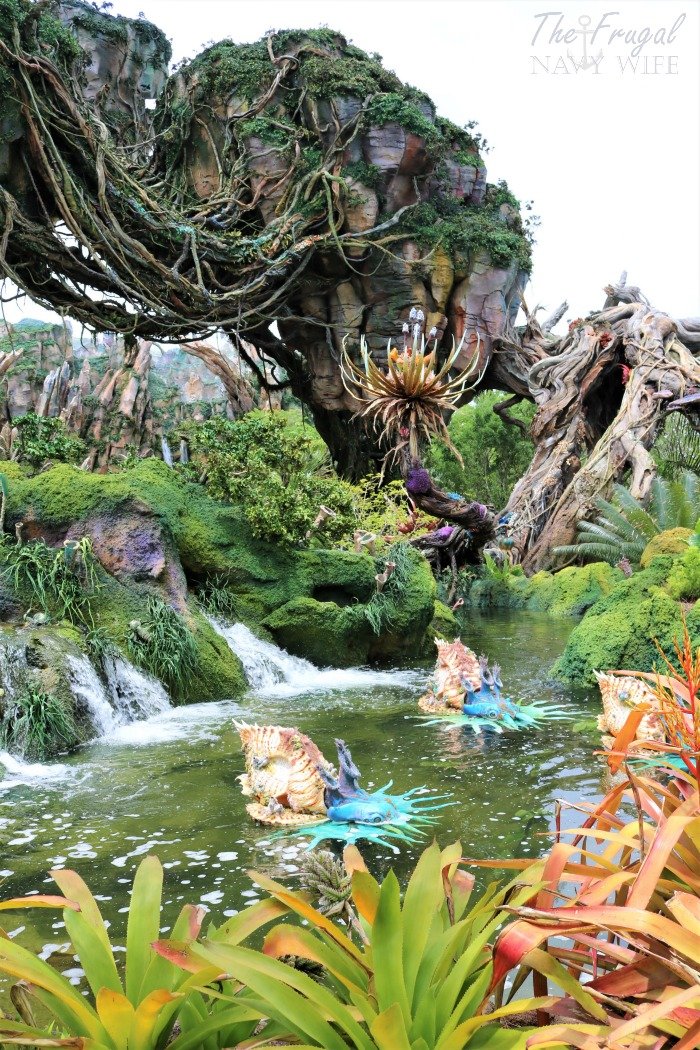 They have also added some cool features throughout like benches that are worked into the rocks, so there are some places for seating here and there, some water areas, like waterfalls and a pond that has some blue creatures in it that will spray you with water if you stand in the right spot.

Then they also have an awesome area with drums built into the rocks. It’s very fun to let your kids play in this spot and it gives you a few minutes to sit and relax if you need that.

Disney has added two new rides to choose from: the Na’vi River Journey and the Avatar Flight of Passage at Disney’s Animal Kingdom.

Unfortunately, the day we were there it poured rain half the time and we didn’t get to ride the river ride. It had a much lesser wait time than the other one, so we didn’t worry too much about it, and then ended up missing it, so I can’t give a review of that.

But, the Flight of Passage ride at Disney World Pandora is awesome. It had a very long wait, but I will say that out of all the rides in that park, it’s worth it. It is unlike any other ride that Disney has in any of their parks. Not wanting to spoil it, I won’t say too much, but basically, you are “linked” with an Avatar, and then go for a flight on the back of a Banshee. It is super smooth, and not scary, so your kids can easily go on it as long as they meet the height requirement. It has aromas, water and as far as the length of the ride, was longer than I expected. 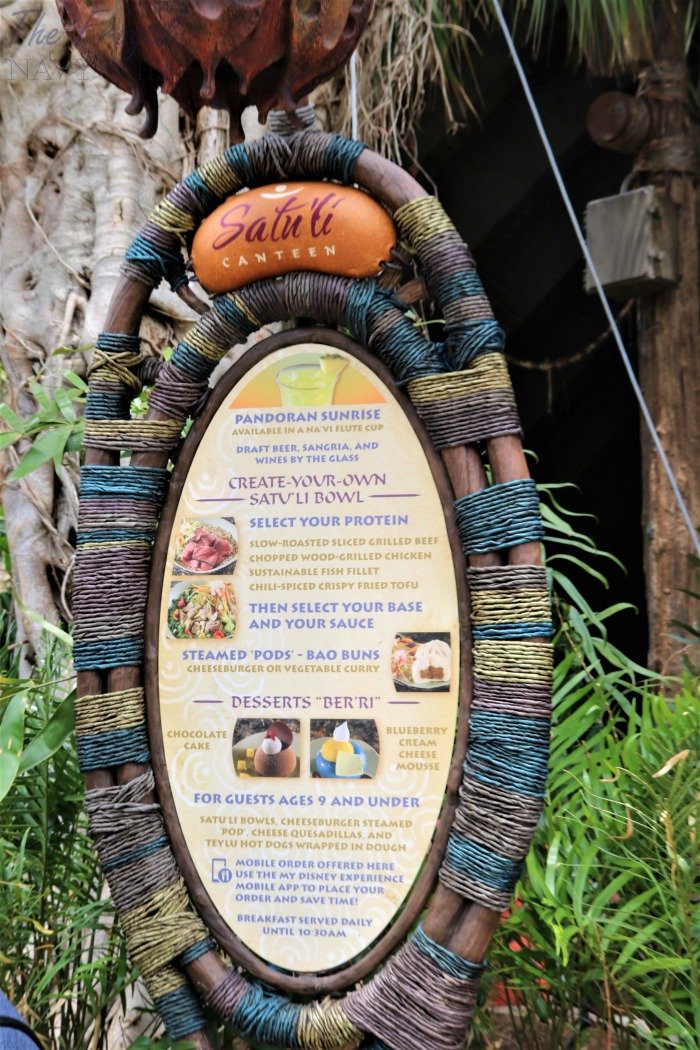 There is a neat shop next to the Flight of Passage ride, that you will come out beside, and just past that is the new restaurant they opened as well.

It has some very neat décor inside with lanterns, wicker and wood, and of course, it provides a nice cool spot to take a break from the heat and grab a bite at Disney World Pandora. 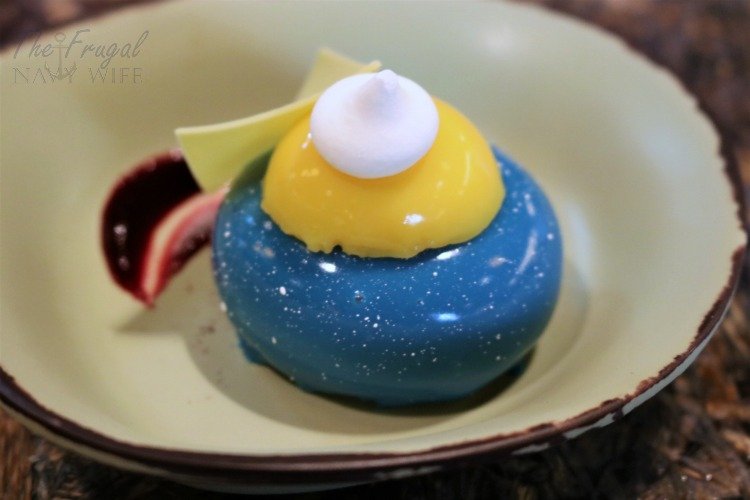 We got drinks and dessert because we had eaten previously elsewhere, but they were all very good. They have several drink choices and some alcoholic drinks as well as sodas and other ones. They have a couple choices for entrees including some meat choices where you choose the meat or tofu, and then a sauce. They also had some great looking pods that were huge and really cool. All of the food was like a work of art.

Overall, especially for fans of the Avatar movie, this area is a must-see. Plan ahead if possible, and get the Disney app on your phone. If you can get fast passes for the two rides, I would highly recommend it, since the wait times will probably be long ones for quite a while being new.